Cave Bath is a thermal bath located in Miskolctapolca,Hungary.(There are only two cave bathes in the world.)

The thermal water helps us to reduce joint paing.The cave bath  can be visited all year long,The cave and the thermal spring have been known since ancient times,

Three pools and an inn were constructed in 1723. The cave itself was not used yet, as the pools were outside. The water was colder than it is now, because the cold water springs of Tapolca (which now play an important role in providing Miskolc with drinking water) were used too. By the mid-18th century, after a short period of popularity, the bath was neglected and by the 19th century the buildings were in ruins.In 1837, the new abbot of Görömböly had the buildings restored and expanded. He also had the first indoor pool (though still outside the cave) built, but only for wealthy guests.In the early 20th century, the growing city of Miskolc bought the area from the Greek Orthodox Church not only because of the thermal water but also because of the drinking water source 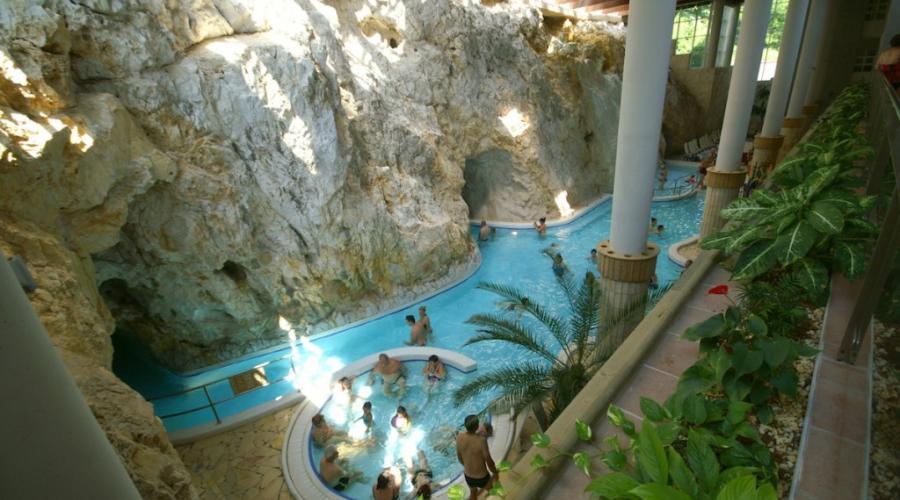 In 1934, Tapolca was officially recognised as a spa town.Since then, the bath complex has been expanded several times. The outdoor pool and the characteristic, seashell-shaped roof before it were built in 1969. In the 1980s, new rooms and corridors were built, and warmer pools (34°C and 36°C) were constructed. The newest expansion of the bath complex started in 1998.

In the regional centre of north-eastern Hungary, in the resort area of Miskolcspring water with a temperature of 30 °C in cave passages unique in Europe elements of an entertainment bath, an outdoor swimming pool and a children's swimming pool in the garden The services of the medicinal compound: hydrotherapy, tangentor, medicinal and refreshing massage, electrotherapy, rheumatological specialist's consultation, sauna.

All in all,whenever you are in Hungary Cave Bath is a must for you.Visiting it will remain an unforgettable experience in your whole life.